In all the hotels in the world, hospitals, clinics, barracks, change and washing of linen are carried out but washing and chemical sanification of pillows, notoriously deposit of bacteria, germs, viruses and mites harmful to health, are made only sporadically. Even the most luxurious hotels, where hygiene is treated in detail, only provide the change of pillowcases letting several guests use the same pillow, with the subsequent increased risk of infection and transmission of viruses from one to another.

Some prominent scientists, including the English Art Tucker of St. Barth's hospital in London, have documented that pillows (especially those in hospitals and hotels), are a dangerous source of infection.

The pillows in our house, despite being beaten and aired, increase their weight by 30% in only two years and this increase in weight is made up of dust, dry skin, dandruff, dry sweat and saliva, dust mites, mites droppings, bacteria , viruses, fungi and molds.

It is also known that in the world there are 250 million people suffering from allergies caused by dust mites, or rather, by their droppings. These allergies affect both the respiratory tract, causing chronic allergic rhinitis and bronchial asthma, and the skin causing severe dermatitises.

To raise the standard of hygiene and safety of pillows, wherever they are, Sanipill S.R.L. has designed, engineered and patented a machine called Sanipill®, absolute world innovation designed to sanitize and deodorize, daily, pillows by a treatment with forced ventilation in an environment saturated with oxidizing gas: ozone, known since 1895. The special fans of which Sanipill©is equipped, force the passage of ozone through the cushions thus making sure that the treatment does not stop at the surface, and it ensures the sanitation and deodorization at every point within them.

Ozone is a natural gas with a great disinfecting power that has a strong action on BACTERIA, VIRUSES, MOLDS, FUNGI, MITES and a deodorant action.
Ozone is a very unstable gas, it solidifies at -250 ° C, while its boiling temperature is of -111 ° C. At room temperature it is in the gaseous state and is heavier than air and then, in the absence of air movement, it tends to go down. In nature it is produced by the ultraviolet rays of the sun and by lightning events during thunderstorms. Since its life time is very short, it must be produced and used in a very short time. Ozone is recognized by the Ministry of Health as Natural Presidium  for environments sterilization, after use it becomes pure oxygen, leaving no residue and it avoids the use of chemical disinfectants and detergents.

OZONE (chemical formula O3) exerts its action of elimination of microorganisms and odors through OXIDATION, losing an atom and returning to be oxygen (chemical formula O2) in about 20 minutes. The ozone generators used by Sanipill S.R.L. produce ozone using the oxygen in the air. The chemical reaction is the following: When the ozone comes into contact with an organic material, a reaction of OXIDATION takes place. In other words, bacteria, viruses, molds, but also the chemical molecules that are perceived as odors, are oxidized, and as a result are disabled. Therefore, "living" micro-organisms are killed, while the odor molecules are transformed into other molecules (odors are eliminated). 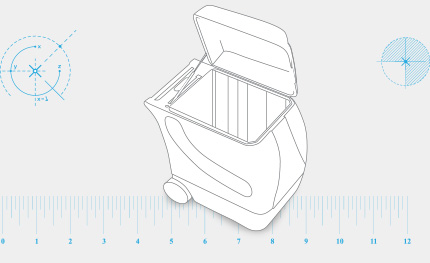 The machine, which weighs 94 kg, is equipped with wheels mounted on bearings and has been designed and constructed so that the operator can carry it wherever he needs to perform the treatment. Its maximum width of 72 cm, allows its passage through all regular doors.

Despite its absolute harmlessness, several safety features have been provided which inhibit the operation of the machine in case of non-hermetic closure of the lid, in the event of non-replacement of the filters on the due date (every 12,000 cycles) and other possible cases due to inattention or negligence. All the materials that compose Sanipill ® are specific and designed for the desired purpose.

Sanipill®, covered by patents and trademarks, complies with the legal requirements of the following Directives:
Technical standards applied to the equipment and/or set:


Sanipill® is equipped with a control panel connected to a microprocessor system managed by special software specifically designed for Sanipill S.R.L. which guarantees a high degree of autonomy to the operator as well as extreme ease of use.
The machine allows you to choose between four different levels of sanitation and deodorization. Once you have chosen the treatment you just need to press the START button and the machine starts its work cycle by defining fully automatically the right amount of ozone needed.

A series of messages on the display of the panel give the operator, at any time, the state of the work cycle and the time remaining to the end of it.
Special electronic locks allow the partial or total opening of the loading door at the end of the cycle.

On each machine a metal plate is applied bearing the EC marking and the main technical characteristics such as model, serial number, year of construction, and more, to be communicated to the manufacturer for the start of the warranty.

The components used are of high quality and with a minimum guaranteed order of thousands of cycles.
Sanipill S.R.L. guarantees an efficient chain of assistance for ordinary and extraordinary maintenance and a long series of spare parts for the maintenance of the efficiency of the machine. 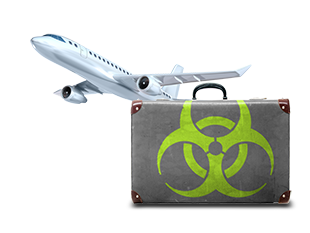 The daily use of Sanipill® to sanitize and deodorize pillows and duvets, avoids exposure of pillows and duvets to fresh air and their contamination by pollen and fine particles, which are often the cause of severe seasonal allergies.

Back from one of our business and pleasure trips, which are becoming more and more frequent, often from geographical risk areas, we carry in our luggage on our clothes and our bodies, viruses, bacteria and pollen that are dangerous to us.
In this case, always bring your clothes to the laundry, take a shower before going to bed and, most of all, use Sanipill ® with daily treatments on pillows and duvets.

Good health to all!